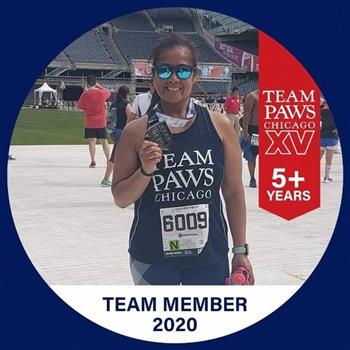 Running to Save PETS Lives!

This is my 8th year on Team PAWS, and another year that I'm proud to be raising funds for PAWS Chicago.

Darlene Mangalindan
Thank you for doing what you do for the doggies in the world!

Jessica Bratko
We love you Lori!! Sending you lots of positive vibes from Jess, John, Owen, Tess, Maymay and Finn!!

Margaret Nielsen
Thank you Lori Payawal for all that you do for our fur babies !❤️❤️❤️❤️
8.

Nicole Majka
My talented friend! Thank you for all you do to raise funds for homeless pets! You rock!