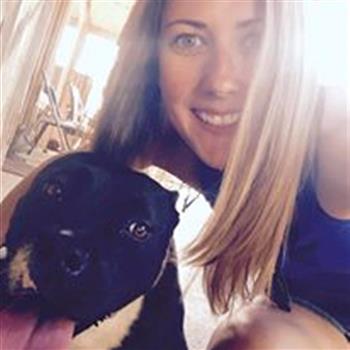 Welcome Supporters! I am running the Chicago Half Marathon in May for TEAM PAWS Chicago!

1. It all started in the summer of 2018 when I first met a little black pittie in the woods of Tennessee. There are many back-roads breeders there who try to sell puppies for a quick dollar and then dump the ones they can't sell. I tried to take this love bug home, but the neighbors decided that they wanted to keep the dog and care for her. It was a very fortunate ending for her. (See her photo in my photos below. Her photo is also my profile picture!)

2. Then in the summer of 2019, I fell in love with an emaciated, exhausted dog in Belize who wandered into the camp where my group was staying. This poor black mixed breed had just had puppies and then once they puppies were sold, she had been kicked out. This information came from the neighborhood boys. They treated her horribly and taunted her and threw rocks at her. She still was leaking milk from her swollen teats. She was so scared and timid that she didn't want us to get close, but she was too tired and starving to move away from us. We started feeding her scraps then I bought dog food. Her transformation in only a few days was amazing. She would wag her tail and follow me around, often laying at my feet. I even taught her to sit. I had it all set up to bring her back to America to foster her through a non-profit, but as I was warned by the Humane Society in Belize, once you get a dog back to health often times the original owner comes back and says they want the dog. Unfortunately, that's exactly what happened. (See her three photos in the group of photos below.The very first photo is from the day I met her.)

3. I was so saddened by Maya's story (the Belizean dog) that I wanted to get involved. Later in the summer of 2019 I began my foster mom journey. I'm gone too long during the work day to foster dogs, so I started fostering kittens and young cats. (Look through my photos to see the adorable kitty fosters I've had!)

4. December started my PAWS volunteer journey. I'm excited for what is to come!


I have a love of pitbulls and pitbull mixes. It is my dream that one day we can build a society that doesn’t judge a dog based on their breed but instead by their character. I hope to see an end to BSL.

PAWS Chicago is dedicated to building No Kill communities – starting with a No Kill Chicago – where all healthy and treatable pets are saved. Since PAWS Chicago’s founding in 1997, the number of homeless animals euthanized per year in Chicago has dropped more than 80 percent. In 2016, PAWS Chicago found loving homes for more than 5,100 homeless pets. But there is more work to be done and your generosity is crucial to this effort.

Please consider supporting me by making a donation and helping PAWS Chicago provide vital medical care, food and shelter to thousands of homeless pets this year. PAWS receives no government funding and relies solely on people like you to help provide continued care for Chicago's homeless animals. Your support will allow us to build a truly humane and compassionate community, one pet at a time. Please consider donating to my cause.

Roy Colver
What a great cause. Thank you Katie. I am having AbbVie match my donation!! Keep up the good work, Roy