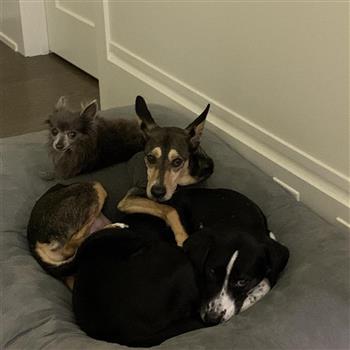 I am super thrilled to be able to join PAWS to raise money for a cause that is so important to me, I changed careers over it! If you know me, animals mean the world to me, and especially those in need. Without rescues, fosters, sanctuaries and the people behind it, none of it would be possible. Those are people on the front lines fighting for animals to be recognized as individuals, to say EVERY LIVING BEING has a choice and deserves to live.

Two of my dogs, Molly and Tiny, are actually rescues from PAWS. Our other dog, Taco, is also a rescue. For Riley and I, they are our everything, our family, our "children." It us. And we wouldn't have it any other way (except maybe more and more rescues if we could!).

In the meantime, let's help raise money to continue efforts in animal rescue, and to perhaps allow space for others, like you and me, to have the opportunity to grow their family and rescue as well! Any donation would be greatly appreciated. A little bit more about rescuing and PAWS below...

Every year in Chicago, nearly 9,000 cats and dogs are euthanized because they simply don’t have a place to call home.

If you are feeling extra generous, please consider sharing!

LOVE TO YOU AND YOURS <3